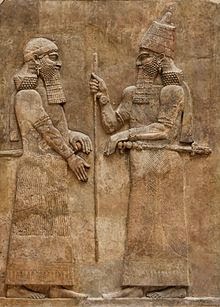 In the reign of Hizkiyahu, attempts were made to create a regional alliance (notably with Moav and Philistia, among others) and take on the big regional powers: Egypt and Assyria.  Chapter 19 is about Hizkiyahu’s attempt against Egypt.  The prophecy was averted, the battle failed.  Instead, Israel, Egypt, and Assyria all eventually found themselves held by Persia, under imperial rule.  Then, indeed, they were all equal (as foretold by Yeshaiyahu), with Israel the favorite of the crown.  Yeshaiyahu then refers to Sargon II‘s success in quelling regional uprising and conquering Israel (over the course of a three-year siege) as an example of what will happen to Egypt in Chapter 20.

Chapter 21 contains a song recording Persia’s (Elam and the Medes) conquest of Babylon.  Then follow oracles against Arab-controlled oases, whose rulers aligned in a failed uprising against Assyria: Dumah, Seir, and Tema.  In short, the Kedarites were subdued.

Chapter 22 is one of the most poignant in of the surviving writings of Yeshaiyahu.  He records the conquest of Jerusalem and surrounding cities: the City of David and the Valley of Zion (Vision).  Clearly, he felt this defeat on a personal level, beyond communication Hashem’s word or evening first hand observation.  All that was dear to him had been conquered.  Yeshaiyahu responds by ordering the demotion of Shevna, the royal steward, and puts Eliakim in his place.  It should be noted that Shevna appears in 2 Melechim 18-19 as a scribe or secretary, and that Eliakim is “over the household.”

Chapter 23 is a prophecy against Tyre (in modern Lebanon).  Tyre was a major trading center of the region at the time, and was frequently invaded by Egypt.  Shalmanesar V of Assyria (727-722) spent five years of his reign laying siege to Tyre, with Phoenician assistance.  Tyre would remain an imperial holding for the same span as the Babylonian Exile: 70 years.

The extent of the destruction wrought in these turbulent years of conquest and reconquest is described in chapter 24.  But the chapter ends on a high note.  Hashem will set everything back to rights in the end.  He will punish the pantheons and kings of the other nations.  Specifically, “the moon shall be confounded, and the sun ashamed.”  The sun and moon were very important gods in the Babylonian pantheon.  And chapter 25 goes on to celebrate the fall of Assyria to the Babylonians.

The celebration continues in chapter 26, not only with the fall of Assyria, but with the fall of her gods and the triumph of Hashem.  But none of this has yet happened as of Yeshaiyahu’s writings.  Yehudah will rise again.  The foreign gods will perish, but we must be patient.  The people of Yehudah must be patient, stay put, and wait for Hashem to act.  Then, and only then, may Hashem’s people rise, as if from the grave.  Once the foreigners (and their deities) have been defeated, once Hashem has shown himself to be all-powerful, the Israelites iniquity will be forgiven, and they may start anew in their relationship with Hashem.  All the war, destruction, and loss are to be a message of hope, reconciliation, and renaissance.