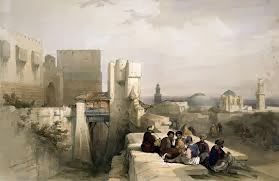 Yirmiyahu 13 opens last week’s reading with an analogy.  Yirmiyahu allows a brand new linen loin cloth to rot.  The loin cloth represents the house of Israel, which is placed close to the body much the way Hashem has kept Israel close to Himself.  But the house of Israel, especially the tribe of Yehudah, has been wicked.  Now Hashem will distance himself from Israel, as He instructed Yirmiyahu to put the loin cloth under a rock, and Israel will be destroyed, just as the abandoned loin cloth was ruined.

It is interesting that 13:18 refers to the king and queen-mother, not the queen.  It suggests to me that, in a polygamous society, the queen-mother, and not any of the king’s wives, holds the influence generally associated with queens in monogamous societies.

Chapter 14 begins with prophecies regarding a drought that plagued the land during this period.  But water isn’t the only thing the land lacks.  It also suffers a dearth of honest prophets, and instead endures a surfeit of yes-men, who wrongly reassure the people of future peace and prosperity.

We acknowledge, O LORD, our wickedness, even the iniquity of our fathers; for we have sinned against Thee.
Do not contemn us, for Thy name’s sake, do not dishonour the throne of Thy glory; remember, break not Thy covenant with us.
Are there any among the vanities of the nations that can cause rain? or can the heavens give showers? Art not Thou He, O LORD our God, and do we not wait for Thee? For Thou hast made all these things.

This is a form that we will see again in Yirmiyahu, and seems particularly appropriate for a priest.  As a priest, it’s Yirmiyahu’s job to be a man of action, not just a messenger.  It is not enough for him to deliver the Word of Hashem, he takes it upon himself to try to avert these disasters as well.
This particular prayer is also interesting in its use of the word “vanities.”  This word is a centerpiece for the book of Kohelet (Ecclesiastes), and literally means “vapors.”  In the use of the word in Yirmiyahu 14:22, it refers to idols–the works of man’s hands–making the rendering as “vanities” very appropriate, and may be the reason this word is generally rendered as “vanities” in translations of Kohelet.  However, the use of this word in Kohelet can deliver equally meaningful messages whether translated as “vanities” or as vapors.” 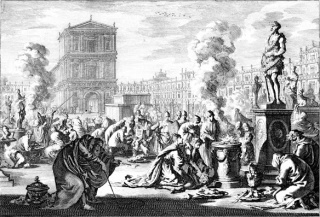 Chapter 15 reiterates the promise of war, famine, and exile in Babylon after the fall of Jerusalem, but attributes the necessity of all this to the wrongdoing of Manasheh, Hizkiyahu’s son and Yosiyahu’s grandfather.  Manasheh was Yehudah’s longest ruling monarch and the first to rule solely after the destruction of Israel.  He also saw economic rejuvenation in his kingdom, due largely to his willingness to play nicely with his Assyrian overlord.

It may well be that Manasheh’s allowance of idolatry–including in the Temple–may have been part of the price of his favorable status among the Assyrian imperial provinces.  Since his reign was so long, though, the opportunity to influence Judean culture was great, and the idolatry promoted during Manasheh’s reign could not be undone with either Manasheh’s repentance or with his death.  This influence was also necessarily greatest in Jerusalem, the seat of trade in Yehudah, and so Jerusalem would suffer the most for Manasheh’s failure to rely on Hashem rather than on the Assyrians for prosperity.
Yirmiyahu hopes, however, that his own faithfulness will not be overlooked.  He has made significant social sacrifices and taken on personal risk to deliver Hashem’s message, and weight bears on him.  And so he makes another appeal to Hashem in 15:15-18.
Chapter 16 continues the theme of prophecy mixed with autobiographical information and prayer.  Yirmiyahu receives instruction to live celibate, so that he will not have a family to lose in the coming disaster.  Indeed, Hashem indicates that those who die will be the lucky ones relative to those who go into exile among the Chaldeans.  But this prophecy also reaffirms Yesheyahu’s assertion that this is a fresh start for the house of Israel (16:14-15):

And finally, chapter 16’s prayer (note the reappearance of the word “vanity”):

O LORD, my strength, and my stronghold, and my refuge, in the day of affliction, unto Thee shall the nations come from the ends of the earth, and shall say: ‘Our fathers have inherited nought but lies, vanity and things wherein there is no profit.’ 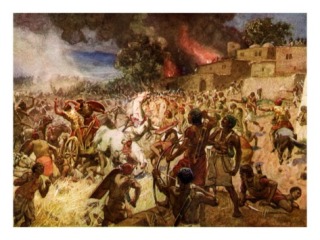 Chapters 18 and 19 contain Yirmiyahu’s example of the potter and the vessel.  Just as the potter can and will destroy the vessel’s he makes when they are marred, Hashem will destroy Jerusalem for its seeming inability to serve His purpose.  And Yirmiyahu delivered this prophecy to the priests and elders at Topheth, which was discussed previously in chapter 7.  Not surprisingly, this prophecy does not go over well, and the son of the priest who manages the Temple has Yirmiyahu put in the stocks overnight (chapter 20). 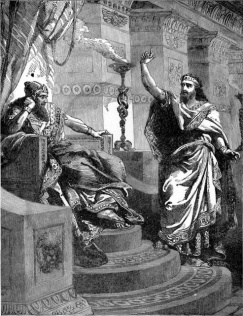 The rest of the chapter is concerned with Yirmiyahu’s condemnation of that priest (20:3-6) and Yirmiyahu’s lament that his service to Hashem is going so ill (20:7-18).  Hashem’s response is to give Yirmiyahu the ear of the king.  Zedekiyahu sends two priests to ask Yirmiyahu to prophecy concerning the kingdom’s fate in reference to the Chaldeans.  Hoping for a prophecy of Israelite victory, Yirmiyahu tells the king that the Chaldeans will win, the king will be taken into bondage, and those who flee will have the best chance of survival.  And to support the call to flee, Yirmiyahu cites Devarim (Deuteronomy) 30:

And unto this people thou shalt say: Thus saith the LORD: Behold, I set before you the way of life and the way of death. (Yirmiyahu 21:8)

This is the last chance for the house of David to redeem itself.  The monarchy must crack down on corruption, or else.  Hashem is done with second chances.