Pantheism is a belief in an eminent deity that is one with the natural world. This approach to the divine became popular in the Enlightenment Era that followed the works of René Descartes (day-kart). The Seventeenth and Eighteenth Centuries would see many great minds apply rationalism and science to religion. A new approach to faith arose out of the works of these philosophers: Deism. 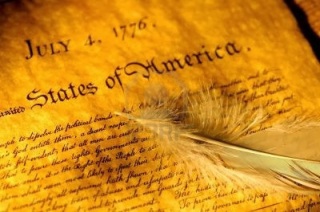 Deists believe that reason and the observation of the natural world naturally prove the existence of the divine. The pantheistic approach that nature and the divine were one and the same grew in popularity. By the late Eighteenth Century these ideas had a large and influential following. In America’s Declaration of Independence Thomas Jefferson refers to “Nature’s [G-d].” He and many framers were believers in Deism. They were men of Christian faith to be sure, but tempered with reason and rationalism.

“The sacred rights of mankind are not to be rummaged for, among old parchments, or musty records. They are written, as with a sun beam, in the whole volume of human nature, by the hand of the divinity itself; and can never be erased or obscured by mortal power.”~Alexander Hamilton, The Farmer Refuted, 1775

The opposite of pantheism is termed dualism: a religious idea that somehow the divine is separate from this world. The Greek of old, who believed that deities watched none too benevolently from high atop Mt. Olympus, are an example of this kind of thinking. Dualists (also called Theists) believe that G-d is separate from the world and that the world is a place that evil can exist while the divine exists in a “heaven” or “paradise” where good people go when they die. The notion that the divine is separate from the world but still exercises influence means that while natural occurrences might be attributed to the divine, science and reason are not part of the system of faith. The divine is an anthropomorphized, supernatural character who acts from outside of the natural system.
These two conflicting approaches have been the source of a major cultural confrontation over the years: they are natural opposites. As this western debate has raged it slowly morphed today into a conflict between science and religion. Science has divided into two approaches now, atheism, the belief that everything occurs through random causation and there is no divine, and a small remaining faction of Deists. Dualists have also been divided into blind-faith dualists and concordists. Concordists seek to reconcile the science and dualism.
Baruch Spinoza
One great philosopher had already beaten modern Deists and Concordists to the punch, and may yet have the last laugh. Baruch (Benedict) Spinoza was a descendant of Sephardic Portuguese Jews who had been forced to flee Portugal to the Netherlands following the Portuguese Inquisition of 1536. Growing up in the religious freedom of Holland in the Seventeenth Century, Spinoza, despite being a prodigy in his rabbinical studies, ultimately departed from Judaism when complaints arose about his notions. Some say he was forced out or “excommunicated,” if such a thing is possible, and a document purporting to have done that has been preserved (although its legitimacy is in question). Spinoza largely adopted the Deist approach. In his writings, however, Spinoza takes a uniquely Jewish approach to Deism: he argues that not only is the divine to be found in nature, but the divine is also more than just the natural world.

In this regard, Spinoza developed what later philosophers have named Panentheism (note the ‘en’ between pan and theism). Spinoza’s panentheism thus holds that G-d, Hashem, is in control of the natural laws and all that exists is one with Him. He, the divine slightly anthropomorphized, is also a separate, conscious entity who guides and controls existence. Panentheism is thus a middle ground in the argument between dualists and pantheists. It also avoids the tortured efforts to make religion more scientific found in cocordism. What is panentheism’s relationship to Judaism? Not only is it completely compatible with Judaism, it can find support in the scriptures.
Science and Religion in Karaite Judaism
The greatest Karaite Hakham (wise man, sage) Yakub Al-Qirqisani, who lived in Tenth Century Iran (Isfahan to be precise), addressed the question of the application of science and philosophy to religion. He argued, convincingly, that the faithful may do so freely provided that they take certain matters as given. Should such notions be allowed to undermine one’s faith they cease to be productive to a religious community and become destructive of its ends. Chief among his argued givens is that the Torah narrative is absolutely correct: that it comes from Hashem, that the laws were given to Moshe, and that there can never be a prophet like Moshe again. He includes other reinforcing givens but this is enough to illustrate the crux of his argument: a person of faith who wishes to remain faithful to Hashem must continue to believe in his religion. He cannot reason his way out of his faith and practice. The point of the exercise, in other words, is to learn and grow with science, but to remain Jewish in practice and belief.
Panentheism
Spinoza’s panentheism holds that all that exists is part of Hashem and not separate; further, Hashem is both one with all that exists and more than all that exists. B’reishit (Genesis) 1:1 gives us some insight into this:

“In the beginning, the divine powers created the skies and the Earth.”

First, Hashem (as represented by the divine powers) creates these things deliberately, which indicates that Hashem predates everything that exists and caused matter to exist deliberately. This could also be the case in Dualism. Going further still, nowhere does the Torah state that anything that was created is separate from Hashem. Spinoza argued that applying a dualistic attitude to Creation involves Hashem voluntarily limiting himself in order to make room for a separate creation.  If Hashem is limited, then he is neither omnipresent nor omnipotent, therefore dualism is in conflict with monotheism.
As a brief aside, Kabbalah argues for a weak and impotent deity  who formed crystal shards filled with a sticky gooey light. They claim the divine is divided up into many sub personalities, they claim fervently that these are not separate deities but aspects of one – the Hindus level the same argument. When people do good deeds, so they say, male and female aspects of the divine “copulate” and draw the shards closer together. Tikkun Olam, is thus about causing supernatural orgies that will purportedly bring on a perfect world when all of the shards combine. This strangely parallels the ideas of the Dionysian Cult and polytheism, not to mention the kinds of reproductive perversions the Torah prohibits in our belief system. In that Kabbalah is inherently polytheist, promotes sorcery, and perversions, Karaite Jews regard this as idolatry and are strongly opposed to the entirety of its philosophy.  Hashem is one, is omnipotent (all powerful), and inspired the Torah and scriptures guide the Israelites and teach mankind right from wrong. If everyone in the world adopted the Jewish moral system, this would indeed mean a better world with respect for human dignity, personal relationships, and traditions that promote a healthy and decent lifestyle.
In Shemot (Exodus) 10:3-4 the plagues that struck Egypt are attributed directly to Hashem:

“And Moshe and Aharon went before Pharoah and spoke to him: Hashem, divine ruler of the Hebrews is speaking to you: “For how long will you refuse to humble yourself before Me? Let My nation go so they can serve Me. If you persist in your refusal to let My nation go free, you will see tomorrow, I will bring locusts into your border.”

The plagues are not wrought by messengers but by natural forces (seismic events). Thus Hashem has direct control over the natural law and natural forces and the ancient Israelites understood that He was in control of these forces. Again and again, this anthropomorphized character that is Hashem demonstrates that He is both one with and in control of nature. He also acts through the will of men and through messengers, but He acted Himself in Egypt.
It is thus possible, or even likely, that the ancient Israelites were more like panentheists than dualists. Certainly, movements like the Tsadokim (Sadducees) were more rationalist. The Enlightenment has brought much needed reform to Western Civilization and has liberated societies from primitive dogmas. No longer are diseases and natural disasters attributed to an angry deity, but to the natural laws. Hashem certainly controls them, but He has also set them in motion in a systematized manner. Good and evil, like pleasure and pain, are human constructs that do not apply beyond our limited understanding. The desire to believe in a benevolent deity who is “good” and “kind” is often a motivation behind dualism. This view is not compatible with the Torah, Neviim, and Kethuvim in which Hashem punishes the wicked, devastates entire empires, and even exiles His own chosen nation; later to restore them.
Spinoza also goes on to describe a kind of determinism in which only certain outcomes can result from our behavior. The atheist notion that man is the master of his own destiny is thus outside of Spinoza’s philosophical approach. Likewise, Torah tells us that we will be blessed with a prosperous (within certain boundaries) and healthy life if we obey the laws contained therein. It also states that we will be cursed for failing to do so. Thus establishing something of Spinoza’s determinism. The consequences do not wait for an unseen afterlife, but are applied in our lives in real time.