The prophecy of Amos begins with an introductory chapter, condemning all the nations and cities that the Assyrians and Chaldeans will conquer, and ascribing causes for said conquest. The list is a familiar one:  Damascus, Gaza, Tyre, Edom, Ammon, Moav, Yehudah, and Israel.  Indeed, we have seen this list reiterated at least in part by each of the prophets we have already discussed.  And the prophecies condemning all these places ultimately came to pass via the Assyrians, Chaldeans, and Persians.

It is particularly interesting that the prophecy against Damascus refers specifically to the king Hazael and his son (and heir) Ben-Hadad III, who are historical figures discussed in Melechim (Kings).  Hazael, in particular, is noteworthy, because his rise to kingship in Syria was foretold to him by Eliyahu (Elijah), and, as foretold by Elishai (Elisha), Hazael would repeatedly harry Israel’s forces.  King Yehoram (the last of the Omrides, killed by Yehu, who was annointed by Elishai) paid tribute to Hazael out of the Temple goods. By referencing Hazael and Ben-Hadad by name, Amos, the amateur, southern prophet, invokes the authority of Eliyahu and Elishai, and makes the claim that his narrative is a continuation of theirs. Indeed, history bore out that claim.  Their invocation also draws a comparison between their time and that of Amos.  Both were turbulent periods in history in which the Israelites struggled with particularly virulent forms of idolatry.  The comparison of the two points in time underscores the seriousness of Amos’ message.

What grabs the reader/listener’s attention in the first two chapters of Amos, however, is the structure used for each prophecy:

“For three transgressions, and for four…”

According to rabbinical tradition, this structure is intended to make reference to Hashem’s patience and mercy. Based on Yov 33:29, it is believed that Hashem forgives three times, but acts on the fourth transgression.

“Behold, God does all these things,
twice, three times, with a man,
To bring back his soul from the pit,
that he may be lighted with the light of life”

I have my doubts about this exegesis in its details, and Yov was written considerably later than Amos, but the basic concept has merit in light of the tone Amos uses. “For three transgressions, and for four…” does seem to imply continual wrongdoing and a loss of patience for intractability. 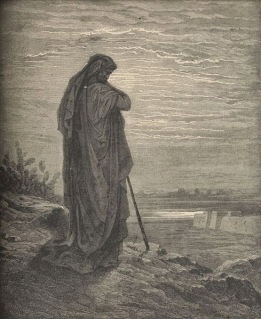 In the details, the condemnation of Israel in chapter two focuses on idolatry and the oppression of the poor.  I find especially interesting 2:8, which refers to the oppression of borrowers and its relationship to idolatry:

Amos also discusses the Israelites’ neglect and perversion of Hashem’s blessings, with special reference to the raising up and silencing of prophets and the calling and profaning of Nazirites.  The latter is noteworthy, because this is the only direct reference to Nazirites made by any prophet, the suggestive comments of Yehezkiel (Ezekiel) notwithstanding.

What follows in chapter three is a series of rhetorical questions culminating in the affirmation that Hashem does not bring disaster without plainly warning His people first through prophecy (3:7-8):

“For Hashem does nothing
without revealing His secret
to His servants the prophets.
The lion has roared;
Who will not fear?
The Lord has spoken;
Who can but prophesy?”

Amos goes on to prophesy the fall of Israel to Assyria, including the destruction of cities, dwellings, and great families, and the idolatrous altars.  Here, in specifically citing the altar at Beit El (Bethel), Amos is referring to a schism in the priesthood, one faction of which continued to worship at Beit El in the north after the construction of the Temple in the south.  After the destruction of the Temple, this schism would come to a head, with Yehezkiel designating Beit Zadok (which led the pro-Temple faction) as the legitimate priesthood in the Return (Yehezkiel 48:10-12). He also, later specifically condemns worship set Gilgal and Bersheva as well.

Chapter four details the ways in which Hashem has plagued Israel to try to coerce obedience.  Amos specifically cites the plagues of Egypt and the destruction of Sodom and Gommorah in comparison to Hashem’s judgment on Israel.  The list of curses visited on Israel closely mirrors those listed in Vayikra (Leviticus) 26, which seems to have been an inspiration to the prophet.

He also uses, in chapter five, the metaphor of a disgraced virgin to describe Israel–metaphor to which later prophets would return. Amos then proceeds to make reference to Torah:

For thus says the Hashem:
“The city that went out a thousand
Shall have a hundred left,
And that which went out a hundred
Shall have ten left
In the house of Israel.”
-Amos 5:3

I call heaven and earth to witness against you today, that I have set before you life and death, blessing and curse. Therefore choose life, that you and your offspring may live,  loving the Lord your God, obeying his voice and holding fast to him, for he is your life and length of days, that you may dwell in the land that the Lord swore to your fathers, to Abraham, to Isaac, and to Jacob, to give them.

In the midst of this interplay between the passage in Vayikra and Devarim, Amos uses an idea expressed three times in Mishle.

Therefore he who is prudent will keep silent in such a time, for it is an evil time.
-Amos 5:13

When words are many, transgression is not lacking, but whoever restrains his lips is prudent.

The prudent sees danger and hides himself, but the simple go on and suffer for it.

I think it is probable that Amos, here is using a variation on a common phrase (as reflected in Mishle), but it is also likely that he had access to Mishle itself, given the similarity already noted between Amos 1 and Mishle 30.  More interesting, though, is the counterpoint between this verse and Amos 3:8:

The lion has roared; who will not fear?
The Lord has spoken; who can but prophesy?

It is not, then, for the prophet to be prudent.  Indeed, we will later learn that Amos visited and prophesied at Beit El, which he so strenuously condemned, much as Yermiyahu (Jeremiah) would later visit centers of idolatry to deliver his prophecies.

At Amos 5:18-20 we see a forceful warning that will later be reiterated by Yesheyahu:

Compare to Yesheyahu 5:18-19 (the alignment of chapter and verse is an amusing coincidence):

Woe to those who draw iniquity with cords of falsehood,
Who draw sin as with cart ropes,
Who say: “Let him be quick, let him speed his work that we may see it;
Let the counsel of the Holy One of Israel draw near,
And let it come, that we may know it!”

The similarity is noteworthy, as it tells us something about Yesheyahu.  First, he had no problem borrowing from an amateur prophet who had been decried by both king and priest in the north, despite being a member of the north’s religious establishment.  This stands in stark contrast to the reception Yermiyahu received from the professional prophets in his time.

Finally, chapter five ends with a condemnation of insincere and hypocritical sacrifices.  This is a frequent theme among the prophets, starting with 1 Shmuel 15:22-23:

And Samuel said,
“Has the Lord as great delight in burnt offerings and sacrifices,
as in obeying the voice of the Lord?
Behold, to obey is better than sacrifice,
and to listen than the fat of rams.
For rebellion is as the sin of divination,
and presumption is as iniquity and idolatry.
Because you have rejected the word of the Lord,
he has also rejected you from being king.”

And for this presumption, concludes Amos, Hashem will send Israel back into the “wilderness” beyond Damascus–in other words, conquest by Assyria followed by exile in Babylon.