This post begins an examination of Yehezkiel (Ezekiel).  He and Yermiyahu (Jeremiah) were approximately contemporary.  However, whereas the writings of Yermiyahu were primarily composed leading up to the Babylonian Exile, the book of Yehezkiel is written entirely within the context of the Exile.  Whereas Yermiyahu accompanies the partisans of Beit David into Egypt, Yehezkiel lives among those exiles in Chaldea.  And, of course, exile is simply a fact of existence for Yehezkiel, while Yermiyahu spends much time anticipating conquest and exile.  For Yehezkiel, the chief concern is how Yehudah will return.

Yermiyahu and Yehezkiel, in addition to being contemporaries, share another link:  they are both priests. Yehezkiel identifies himself at the outset of his prophecies as “Yehezkiel ben Buzi ha Kohen”–Yehezkiel son of Buzi the Kohen (Priest)–which begs the question: Who was Buzi?

All biblical names are titles, so a name does not always establish an identity.  The name cited for parentage is usually that of the father or a paternal ancestor (founder of a tribe, nation, or clan, or some notable ancestor).  In this case, there is no individual named Buzi mentioned elsewhere in the scripture.  Bresheit (Genesis) 22 does mention Buz as one of Avraham’s nephews and an uncle of Rivka, and another Buz is listed in 1 Dvrei ha Yomim (1 Chronicles) 5 as a descendent of Gad.  Avraham’s nephew was the founder of the Buzites mentioned in Yov (Job) 32 and Yermiyahu 25. However, neither of these individuals could be a paternal ancestor of a Kohen.

Many suggest that Buzi was Yehezkiel’s mother or (more plausibly) that his mother was a Buzite or descendant of Buz the Gadite.  However, I find neither suggestion compelling.  I think it is more likely, given Yehezkiel’s baroque style, that “ben Buzi” is a title that Yehezkiel wishes to apply to himself and the disgraced Kohanim.  Buzi means “my contempt/shame/disgrace.”  Given the role, according to Yermiyahu, that the corruption and perversion of the priesthood played in Hashem’s decision to cast Yehudah into exile, it seems appropriate.  “Yehezkiel the son of My Contempt, the priest.”  A priest without a temple, cast into exile by his own deity, could easily be an object of mockery and righteous contempt.

That aside, chapter 1 opens Yehezkiel’s vision.  Yehezkiel’s visions serve, in part, to establish his legitimacy as a prophet.  As with Yermiyahu, Yehezkiel is not a professional prophet.  And, unlike Yermiyahu, he lacks the influence and the political structure to spread his message.  Yehezkiel sees beings on chariots.  Each has four faces: human, eagle, lion, and ox.  It is more than reasonable to assume that the three animals represent three regional powers important to Israel’s history: Egypt, Assyria, and Chaldea.  These three are the instruments of Hashem’s wrath.  They are his messengers, bearing down on Israel like fire on wheels.  And the glory of Hashem always shines–a beacon of promise–from the clouds of His destructive impulses (1:28).  I would also posit that the fourth face represents Cyrus, the “shepherd,” who will deliver Israel and Yehudah from Chaldean rule into the Persian Empire.

Chapter 2 lays out Yehezkiel’s mission:  He is to deliver Hashem’s warning to Israel and Yehudah, that they should reform, with the same level of resolve demonstrated in their refusal to comply.  To that end, the intensity of Yehezkiel’s writings is perfectly suited; and their graphic nature should not be allowed to over-shadow his message to the men and women living in his own time.]

Yehezkiel’s visions also serve another purpose: impressiveness.  By their sheer intensity, they establish his legitimacy.  But they also convey an impression of overwhelming power.  Yehezkiel is writing from a refugee camp.  His audience is in the throws of being conquered after having been displaced.  This audience has personal experience of the power wielded by the conquering Chaldeans.  They need a strong reminder that this power is nothing in comparison to Hashem’s strength, and exists only at his pleasure.

In chapter 3, we see the vision of the scroll.  Yehezkiel is instructed to consume a scroll, and then to deliver its words to the people, who, he is told, will not be receptive to the message.  This vision makes reference to other points in scripture.  For example, Yehezkiel finds the scroll to be “as sweet as honey.”  Compare to Tehila (Psalm) 119 in the verses for the letter Mem (97-104) (emphasis mine):

Oh how I love your law!
It is my meditation all the day.
Your commandment makes me wiser than my enemies,
for it is ever with me.
I have more understanding than all my teachers,
for your testimonies are my meditation.
I understand more than the aged,
for I keep your precepts.
I hold back my feet from every evil way,
in order to keep your word.
I do not turn aside from your rules,
for you have taught me.
How sweet are your words to my taste,
sweeter than honey to my mouth!
Through your precepts I get understanding;
therefore I hate every false way.
The reference at 3:12 to the voice of an earthquake is also reminiscent of the famous story of Eliyahu (Elijah) waiting for Hashem outside a cave (1 Melechim [Kings] 19:11-13): 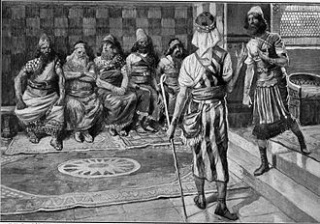 Indeed, the circumstances are similar (1 Melechim 19:17-18).  Yehezkiel is drawing attention to the fact that this has happened before:

Yet again, as laid out in Yermiyahu, Israel’s punishment for idolatry is to be divided among different violent deaths, with a small remnant remaining who will have the opportunity to be righteous.  Indeed, chapter 5 demonstrates how the children of Israel will be scattered.  Note that the phrase “execute judgments” in Hebrew is the same as “obey rules.”  When an individual does not obey rules, the rules demand that a judge execute judgments against him.  By sending the children of Israel into exile and subjecting them to both famine and sword, Hashem is obeying the rules he set out in His covenant with the children of Israel.  It is important that the Prophets reinforce the justness of this judgment.

But now that Hashem has given Yehezkiel “more understanding than all [his] teachers,” to quote the psalmist, he also bears greater responsibility.  Yehezkiel is now the “watchman” of his people (again, a reference to the story of Melech Yehu (2 Melechim [Kings] 9:17).  He bears the burden of warning the exiles and survivors to righteousness.  And if he fails to warn them, he will bear responsibility for their fates (3:17-21). Moreover, Yehezkiel will only speak the Word of Hashem.  He will not be permitted to speak otherwise.  There will be no opportunity for Yehezkiel to deliver false prophecy (3:25-27).

In chapter 4, Yehezkiel is given instructions to model the siege of Jerusalem for the refugees dwelling on the River Chebar.  Not only does he build a model of the siege, but he eats rations: about 7.76 ounces (about 220 grams) of bread and about 20 ounces (a little over 1/2 liter) of water per day. 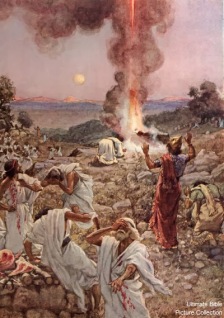 Chapters 6 and 7 take up again the comparison Yehezkiel wishes to make between his own time and that of the defeat of Achav (Ahab) by Yehu and between himself and Eliyahu and Elishai. Yehezkiel prophecies the eradication of idolatry in Israel by the sword.  So did Yehu do to Baal in earlier times, and those who were not killed by Yehu or conquest were the responsibility of Elishai.

Chapter 8 concerns a vision Yehezkiel received in Jerusalem while with the Great Sanhedrin, portraying the idolatry of its members and their complicity in Israel’s plight.  Significantly, it implicates Ya’azniyahu (Jaazniah) ben Shaphan in this corruption.  Remember that Shaphan was the scribe who brought the scroll from Hilkiyahu to Yosiyahu, that his sons feature prominently in Yermiyahu, and that Shaphan’s grandson, Gedaliyahu was appointed provincial governor over Yehudah by the Chaldeans.

Likewise, Yehezkiel witnesses women mourning Tammuz (Damuzi) (8:14), a Chaldean agricultural god, who was said to be imprisoned in the underworld for six months of the year (much like Persephone in Greek mythology).  His major festival was a six-day funeral that coincided with the summer solstice, during which people would engage in ritual mourning.  Presumably, the twenty men described worshiping toward the sun are also engaged in the cult of Tammuz.  This would have been an especially wicked cult to participate in at the temple, since it centers on death.  It is also a noteworthy cult for Yehezkiel’s purposes, because he notes that the women participating it worship toward the north–the direction from which we see the arrival of the Chaldeans.  The Israelites may have been conquered by the northerners, but they should not pay them any reverence. 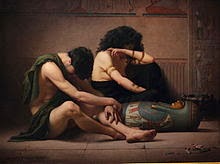 Finally, chapter 9 returns to Yehezkiel’s interest in the reign of Yehu and other earlier points in Israelite history.  He receives a vision of six messengers, who mark the inhabitants of Jerusalem according to whether they will be slaughtered or survive.  This vision hearkens both to the destruction of Sodom (Bresheit [Genesis] 19) and to the Tenth Plague of Egypt (Shemot [Exodus] 12:22-24), in which the Hebrews marked their houses to avoid affliction.  But it also pays homage to Yehu’s and Eliyahu’s destructions of the worshippers of Baal (2 Melechim 10 and 1 Melechim 18, respectively) and to Yosiyahu’s cleansing of the land of idolaters (2 Melechim 23).